This offer is very popular 28 people recently chose this activity

Organized by:
Blue Island Divers
Need help?
Write us or consult our FAQ
This offer is very popular
28 people recently chose this activity

Are you a qualified diver that wants to explore Antiparos under the surface? Then, Blue Island Divers have the right activity for you... it's called Adventure Dives in Antiparos. The instructors of Blue Island go to different spots every day and they have discovered already some of the most exhilarating places to dive in. Every dive lasts approximately 45 minutes and you can choose from different types of dives like wreck, reefs, caverns, holes and many more. You will be awed by the volcanic creations under the surface of the water.

This dive site, on the south of Antiparos, is only visited by Blue Island Divers, so it's guaranteed to have the complete reef to yourself.  It is a haven for Octopus and Morays and swimming over a couple of big canyons you may also find Lobsters hiding. The dive culminates at a big bed of Amphora left abandoned for 2000 years; take a look inside some of the pots, for you never know what marine animal may have made their home there.

This small Island has the added attraction of the church of St Nicholas, The Patron Saint of Antiparos, built upon it.  The dive itself starts over a nice sheltered lagoon where you drop into very shallow water and are able to get your buoyancy and kit together before descending down to a maximum depth of 16 metres. This site is frequented very regularly by large schools of Amber Jacks as well as Barracuda. On regular dives, you can see Octopus, moray eels and scorpionfish.

The Wall
This dive, which is along part of the island’s coastline, gradually slopes down to 35m. Along the wall big rocks give shelter to all kinds of Mediterranean fish; groupers, moray eels, scorpionfish and big shells are to be seen on this site. The wall at 18 metres depth is covered with coral, sponges and tube worms in abundance and make it an ideal end to the dive.

Shipwreck - Manna
The 70m long shipwreck which sank in the year 1884, sits upright at a depth of 30 metres. As you descend into the blue, you see the shadow of the boat with a big pipe lying along its centre. Great visibility gives you the opportunity to explore the wreck more closely and discover it’s secrets.

Bubble reef
This dive starts on a plateau which is at a depth of 5 metres. Following a steep drop-off, you find a narrow canyon through which you swim along and come out into a field of Posidonia. At the beginning of the dive, you will see small sandy bottomed overhangs covered with corals and sponges and a few metres later a beautiful cavern with colourful walls. The rock formations have created a huge hole where the sun rays pass through. The ascent will be carried out through the ceiling hole into the sun rays and on the way back to the boat you will watch the bubbles coming through the caverns pores.

Three Valleys
The Three Valleys is somewhat connected with “The Canyons ” although it is actually a different site. This site has plenty of marine life and a hill that slopes down to a large area covered with Posidonia and rocks.

The Canyons
On descending you begin swimming through the canyons which are the main attraction of the site. These canyons are the home to many critters that like to hide there. These include Lobsters, Octopuses, Morays and crayfish, so be sure to look in the many crevices and holes along the way. Out in the blue, you may be lucky to see schools of Barracuda and Amber Jack Tuna swimming by on their way to deeper waters.

Barracuda point
Barracuda point is a reef that rises from the depths up to 12 metres. At 20 metres there are large rocks, walls and a small canyon. Around it, you may see thousands of small fish and very often Barracudas, Groupers and Stingrays.

Stringray point
After the descent, you swim to the reef’s edge at 5 metres, enjoy the view and then go down to 18 metres and swim along the wall. Thousands of small fish swim around. At 25-30 metres (advanced divers) you can see Groupers and lots of colourful Anthias.

Cathedral
Incredible rock formations and a wide swim through give The Cathedral its name. Walls covered with hundreds of colourful sponges are the main attraction of this site, where you will light the torches, enjoy the colours and watch the fish swimming out there in the blue.

Red Rock
Red Rock is a large piece of volcanic rock jutting out of the sea just a 10-minute boat ride from the Dive Centre. The formation has a reddish colour to it, hence its name. The bottom of the main base is at 12 metres, but swimming around it can take you to almost 30. With plenty of nooks and crannies and a swim-through along the way, you are guaranteed at least a couple of Morays hiding in their holes.

Express Samina shipwreck
This 115 metres RO-RO ferry tragically sank after hitting some rocks in stormy weather during the evening of September 26th 2000, resulting in the loss of 82 lives. Lying on its starboard side at a depth of 34 metres, this is best appreciated over a number of dives. You can still see cars inside the main vehicle hold, along with many other items from the daily operation of the ship. This wreck is always treated with respect and consideration.

Paderonisi Cavern
Situated a short 15 minutes away from the Dive Centre, this cave (known locally as The Blue Dome) is the only one around this area where you can surface inside and remove your regulator and mask. Depending on your level of experience, you will enter through one of three ways: a tunnel, a hole or the main opening. The inside is illuminated via the large entrance that allows enough light in to see the many strange forms of stalactites and formations that drop down from the ceiling. Everybody that visits always wants to return for another trip.

One Dive to explore one of the spots mentioned in the main description. You can either join Blue island Divers in the morning dive (at 9 a.m.) or in the afternoon (at 2 p.m.). Every dive lasts approximately 2,5 hours (briefing, equipment try, boat transfer) while you have 45 minutes approx. underwater.

Two Dives to explore two of the spots mentioned in the main description. You will join Blue island Divers in the morning for the first dive (around 9 a.m.) and then you will go on the second dive in the afternoon. You will have two dives of 45 minutes approx. each.

Four Dives to explore four of the spots mentioned in the main description. You will have two dives per day for two days - one in the morning and one in the afternoon.

Six Dives to explore six of the spots mentioned in the main description. You will have two dives per day for three days - one in the morning and one in the afternoon.

Eight Dives to explore 8 of the spots mentioned in the main description. You will have two dives per day for four days - one in the morning and one in the afternoon.

Ten Dives to explore 10 different spots around the island of Antiparos. You will have two dives per day for five days - one in the morning and one in the afternoon. The schedule is flexible so it's up to you how many dives you will have per day. 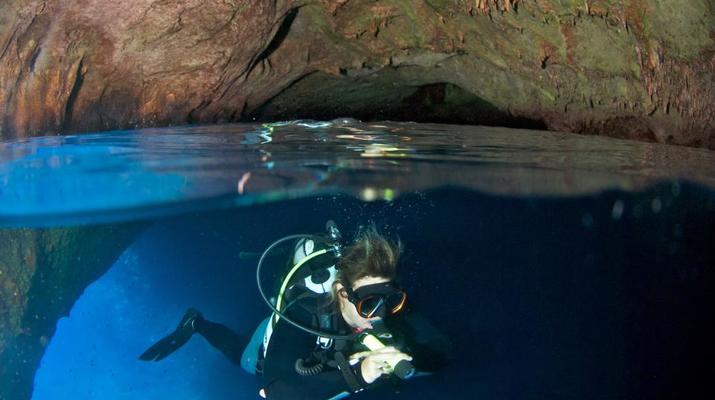 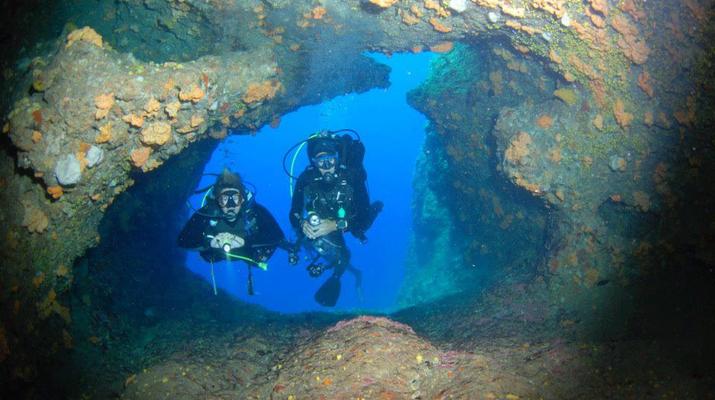 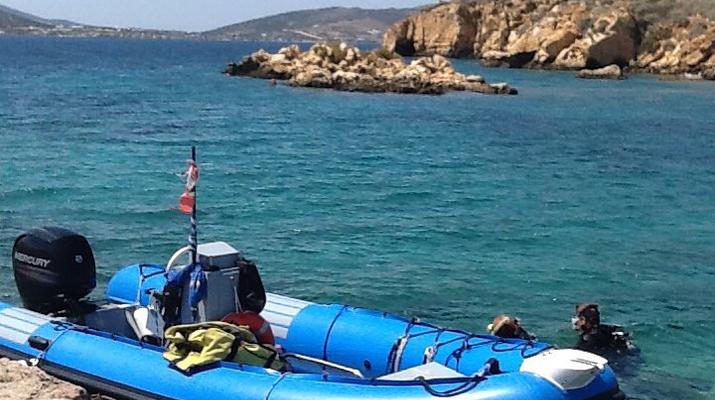 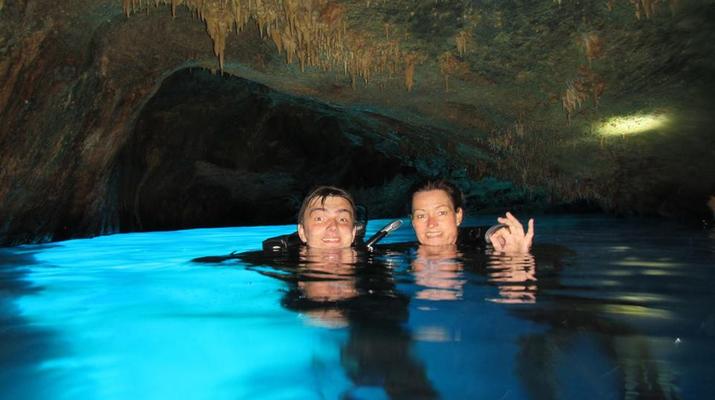 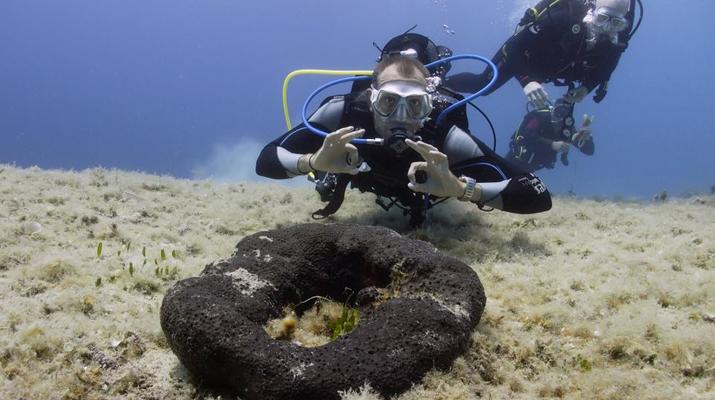 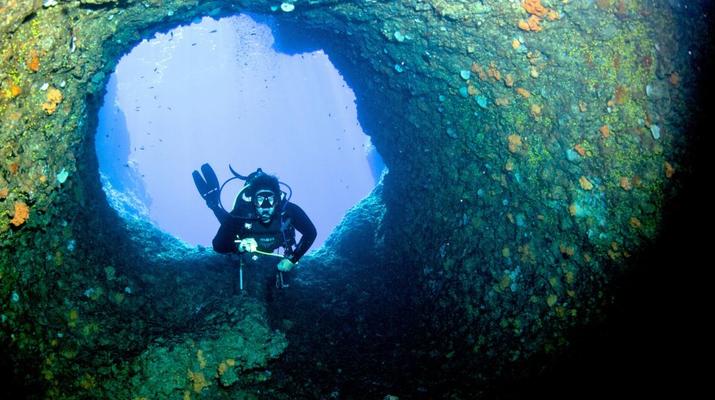 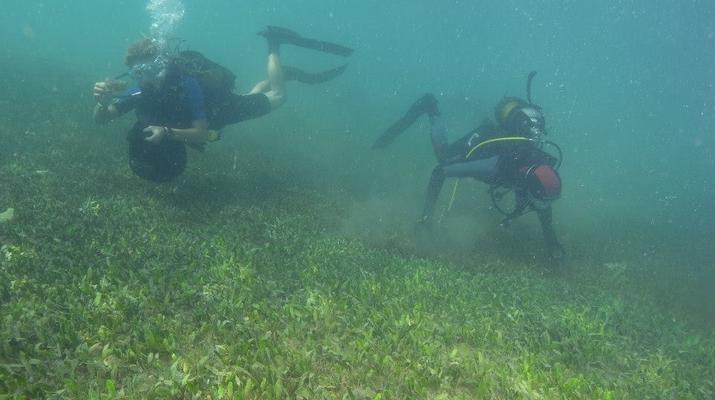 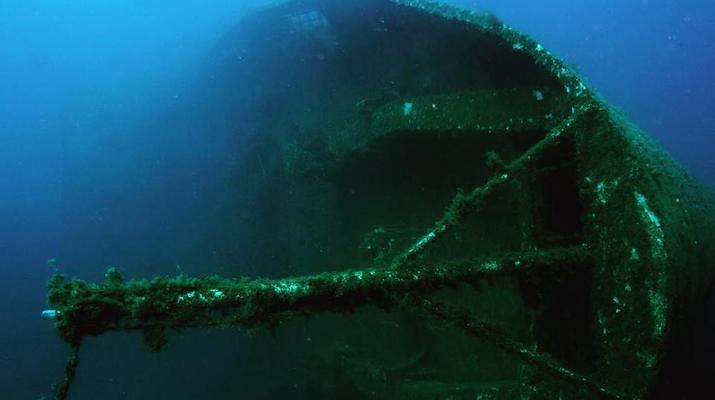 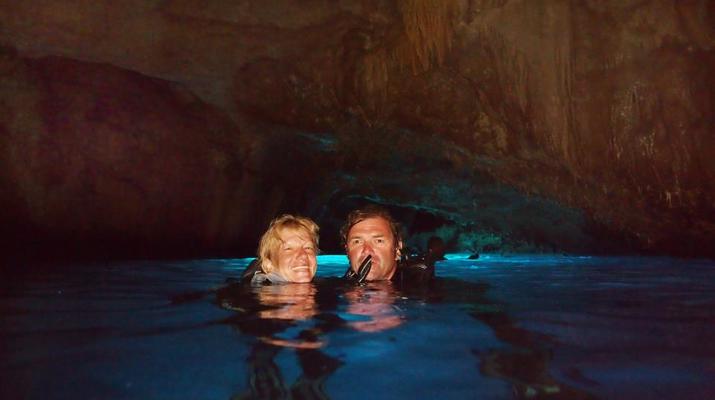 Diving around Paros and Antiparos is great. Water is warm and visibility is excellent (<20m). It's really a great activity to take a break off the usual beach-taverna-siesta combo, or to pass your PADI diplomas.

Your activity Adventure dives in Antiparos